Transparency and Inclusion, the driving concepts of Americas CEOs Summit in Peru

By SheWorks
18 de April de 2018
That’s a wrap!  Every three years, the most influential business forum of the America, brings together top CEOs, Heads of State, and over a thousand business executives for strategic discussions of issues related to economic growth and development; and the VIII Summit of the Americas (Lima, Peru, April 2018) did not disappoint.
Opening remarks were delivered by Martin Vizcarra, President of Peru; followed by Luis Alberto Moreno, President of Inter-American Development Bank (IBD).  Also in attendance the heads of state of Argentina, Bahamas, Bolivia, Canada, Chile, Colombia, the Dominican Republic, Ecuador, Honduras, Mexico, and Panama. A remarkable group of CEOs of leading companies participated as panelists and speakers at the event and, refreshingly, 45% of the panelists were women.

Our panel focused on the leadership and driving forces behind the digital transformation, but most importantly the acceleration of problem-solving to strengthen global transparency.  In our discussions, we talked how both public and private sectors are accountable for their roles in building a strong economy, as past evidence shows that a lack of transparency can negatively affect the capacity for sustainable growth.  In this digital era, there are new technologies and platforms available that implement highly sophisticated monitoring measures, to build trust among businesses and prevent acts of corruption. As Co-Founder and Chairwoman of TransparentBusiness I could not be more proud that the private-sector and government are committed to embracing transformative technology and innovative solutions to represent the integrity of their business.  In case you missed our panel on live stream; you can view it here

I have so much admiration for all of the panelists and my fellow entrepreneurs who attended; their dedication to bring diversity and inclusion in to the future of work is unparalleled.  Their encouragement, strategies, and resources are empowering the next generation with the skills and knowledge they need to deliver results for the future success of the not only the people of the Americas, but the world. It was an honour to be amongst these leaders, and was truly inspired by their authenticity and energy they bring to the table.

“Women at the Forefront of Economic Prosperity in the 21st Century”, was another key theme to the event to bring awareness to the on-going gender gap; outlining what opportunities there are for women in an inclusive working environment and career balance.  It was noted by Julie Katzman, Vice President and Chief Operating Officer at IDB that “GDP in Latin American would rise by $2.5 trillion USD if the gender gap were fully closed” a higher participation of women in the workforce only produces more economic opportunities and fosters global sustainable growth.

The Americas Business Dialogue (ABD) presented their report “Action for Growth” at the closing planel of the event where 42 measurable recommendations were published for 2018-2021 in five key themes: strengthening transparency and integrity, digitizing growth, trading for tomorrow, powering development, and upskilling for the future.  These themes represent the shared goals and future development of the Americas; link to download full report and support ABD’s “Commitment to Partnering for Transparent Development and Growth in the Americas”. 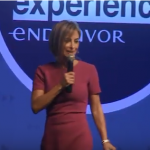 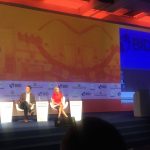